Voltage at the positive terminal of a battery will last a constantly, until the cells ran out of charge. If we plot a graph illustrating voltage changes with time, the graph for a new battery as follows: 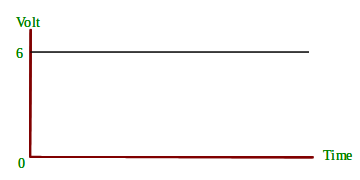 Tangible graphs above is horizontal straight line. The graph shows that battery voltage will stay constant at a value of 6 V.

If we connect battery to a lamp, we can use a multimeter to measure the current flowing through it. Because the voltage is constant, thus current flow to the lamp is also constant. Current versus time graph is also a horizontal straight line, as the graph above. A flowing constant current is called as direct current, usually abbreviated to DC.

Currents that we get from some types of generators as well as electricity generators, in contrast with this DC current. Current from the generators continuously changing its direction.

Such flow is called as alternating current, abbreviated to AC. AC current is depicted graphically as shown below 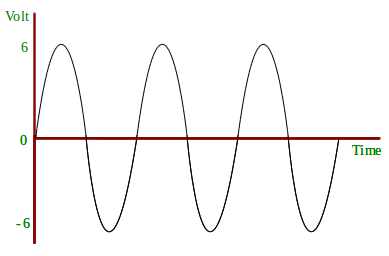